Eddie Adcock talks about Smokey Graves, who he says was ahead of his time. He talks about how creators are always ahead of the audience in terms of what is popular. What creators are creating will not be popular until later, once the audience has had time to adjust to the new style, therefore those who copy others are always more popular than the creators themselves. Adock talks more about the difficulty of being a self-taught musician and the importance of listening to the inspiration inside of you instead of trying to imitate others. Eddie and Martha Adcock discuss the reasons why touring back in the early days of Eddie's career was so difficult, including narrow highways, few restaurants and hotels, and low speeds. He describes how his band traveled from one show to another. Eddie Adock talks about working with Mac Wiseman after working with Smokey Graves. He says working with Wiseman was the best job he ever had; he was making $90 per week in 1955. He talks about his friendship with Wiseman. He talks about Wiseman's popularity and the crowds he drew. He talks about the Bluegrass industry at the time of this interview, including fees artists are charging and the crowds they can draw. Adcock talks about working for Bill Monroe who paid him far less than Wiseman did.

Eddie Adcock talks about how he became a member of the band The Country Gentlemen because of a car accident. Eddie Adcock describes how The Country Gentlemen would decide on arrangements for songs. He says they often would not discuss them prior to going on stage and would have a telepathic connection with one another which allowed them to switch parts, remember lyrics, and create arrangements on the fly. Eddie Adcock talks about Charlie Waller's natural talent for singing but says that he (Eddie) and John Duffey did most of the work for the band, booking gigs, writing songs, and other business aspects of the band. He talks about what he said at an IBMA meeting at which they were discussing who to nominate for an award, for which Charlie Waller had been suggested. He talks about Pete Roberts' (aka Pete Kuykendall) influence on The Country Gentlemen. Eddie Adcock talks about the advent of the Newgrass subgenre with the formation of bands like IInd Generation (Second Generation) and New Grass Revival. He talks more about the audience needing time to adjust to new styles, the importance of not copying other musicians, and the (in his opinion) incorrect thinking that one artist can be the "best."

Eddie Adcock talks about Martha's role as the sound engineer for his band before she later joined the band herself. He talks about her talent as a singer and a rhythm player. Martha discusses her own early musical influences, moving to Nashville to write music, and how meeting Eddie and his band was a fulfillment of her dream for her career and life. Eddie and Martha Adcock discuss the diverse crowds Bluegrass musicians would play to during the sixties and seventies, and how those crowds did not always get along with one another. They talk about how those rowdier crowds made the traditional Bluegrass musicians and promoters shy away from the more progressive Bluegrass groups. Eddie and Martha Adcock talk about Eddie's invention of the Guitbo, a combination of an electric guitar and banjo. He talks about how he created it, and the system of foot pedals and sliders he also created to control echo, tempo, volume and other aspects of the instrument. He talks about playing the Guitbo on David Allen Coe's tour. 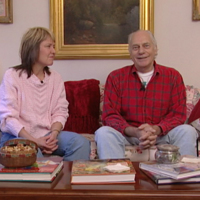